WHEN YOU LOVE WHAT YOU DO,
IS IT STILL WORK?

Since 1967, Eastern Mountain Sports has been helping people of all ages and abilities to have more fun outside. As a member of the SDI USA, LLC Family and a trusted source of top-quality outdoor gear, apparel and advice, we operate over 20 locations in twelve northeastern states, as well as six Eastern Mountain Sports Schools, offering instruction in climbing, mountain biking and backcountry skiing.

And since having fun outside is impossible without open and accessible places to play, Eastern Mountain Sports partners with Mount Washington Observatory, Adirondack Mountain Club, Appalachian Mountain Club, Connecticut Forest and Park Club and the Green Mountain Club. 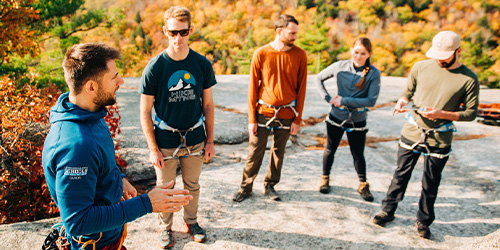 During the 1970’s, EMS began its private label production and focused on limited “Techie” items, branding both packs and jackets with the EMS logo. In addition to beginning their own line, the company rapidly moved into a growth phase, opening stores in Lake Placid, St. Paul, Burlington and opened a Nordic Touring Center in Intervale, NH.

Over the next few decades, EMS continued to open stores in new markets, evolve their product mix, and develop a strong and loyal customer following. During the early 2000’s, EMS peaked with 89 store locations across the mid-west and Atlantic states. Eastern Mountain Sports is held by SDI USA, LLC along with Bob's Stores.

At Eastern Mountain Sports, we are committed to providing a diverse benefits package designed with options to help satisfy all the health care needs of our full-time employees and their families. The program also encourages our employees to strive to meet their retirement goals as well as provide an avenue for a positive work-life balance.

The adventurer’s heart is a spellbinding mix of passions – a fire that burns to explore the limits of both nature and self. And to push those passions to the max every single time they take it outside, we at Eastern Mountain Sports know that every adventurer needs to believe in every single thing that’s in their pack – starting with the pack itself.

But reliable and functional outerwear and gear is only the beginning. For us, value that’s also valuable begins with great people. From the product design process to expert guidance about its practical application all across the great outdoors, we share your passions – our outdoor heritage isn’t just about what we sell, it’s about who we are.

What our employees are saying:

“ The best thing about EMS is the people you work with. I've been fortunate to work with some great mentors who guided me through my career and believed in me every step of the way. It's an awesome feeling to work in place where your ideas are valued and talent is nurtured. EMS has been a perfect match for my personal and professional values, plus it's just a lot of fun! If you're into the sports, then EMS is the place for you! ”

“ I came to EMS as a seasonal hire expecting to just work through the holiday season, and much to my surprise, almost 10 years later I am still here. I appreciate the "Mountain Life" atmosphere and work with a terrific group of people. Every day I get to talk to customers about their outdoor activities and adventures along with sharing experiences of my own. I am also very proud of our sincere commitment to our customers and to the outdoors we love to play in. ”

As a loyal and dedicated employee, we want to reward you for your hard work and see you grow and succeed in whatever path you choose. Since our employees at every level are passionate about our culture and our company, we focus on promoting from within. Offering a variety of career advancement opportunities, an employee can grow within their own store, or upwards into a home office or distribution center role within the SDI USA, LLC Family.